Flock Together - reclaiming the outdoors for Black, Brown, and people of colour

How this bird watching collective has created a global community to combat the underrepresentation of POC in nature and provide a space for healing.

Perhaps the biggest irony of our modern age is how difficult it is for us to do nothing. As daunting as it is to be with our own thoughts, it’s actually one of the more profound and distinctive qualities of the human experience. Developing the practice of introspection can offer a contemplative space for reflection, sometimes just outside your own doorstep.

In 2020, as the world was reckoning with a global health crisis and racial uprising, Ollie Olanipekun and Nadeem Perera bonded over a shared love of birding and the outdoors. Having recognised the vital role of nature for healing long before it became a lockdown craving, the pair formed Flock Together – a birdwatching collective for people of colour to reclaim green spaces and rebuild a relationship with nature.

For both founders, Flock Together is simply about making the outdoors accessible to as many people as possible. “We want to encourage everyone globally that the outdoors is yours. Whatever you’re going through, use this space for healing and perspective,” explains Ollie, the group’s CEO and a creative director from North East London.

Almost a year since its inception, Flock Together wildlife director Nadeem reflects on how it all started while coaching Youth Sports. “I was speaking to a parent after a coaching session, who recommended I follow Ollie on Instagram. A few days later, Ollie had posted a series of posts about birds he had seen.”

Nadeem, who has over 10 years of bird-watching experience replied to Ollie’s post, naming them all. “Ollie was like, man, how do you know this? I told him I was an avid bird watcher and he said he’d been wanting to start a bird watching club for ages. So I said sign me up.” Once the project kicked off, the response exceeded their expectations.

“On our third walk in Epping Forest, we turned up to the car park and there were more than 60 people. We were like, oh, this is getting big now! That was a brilliant walk as well,” says Nadeem. From then on, familiar faces and first timers began to form the Flock community. 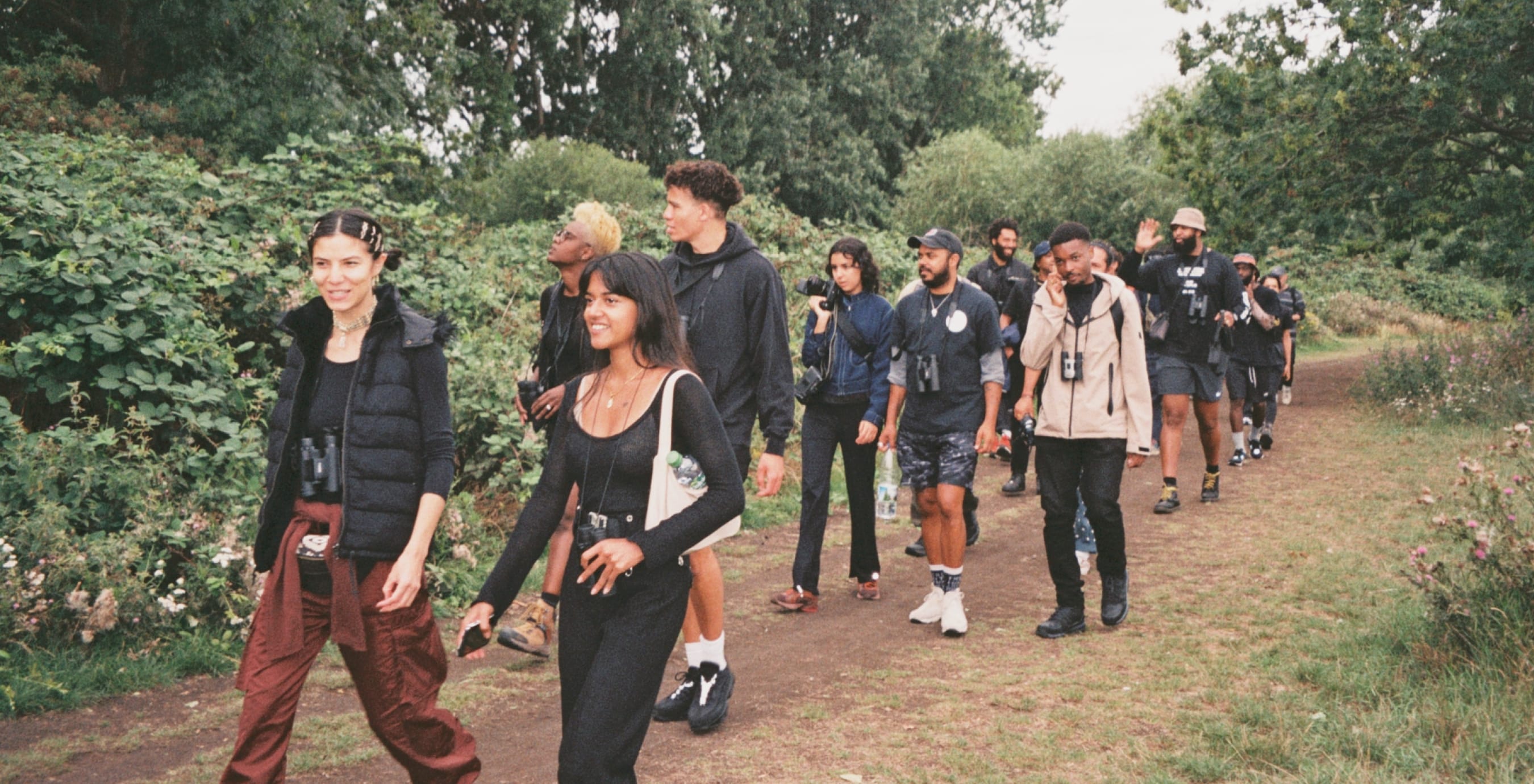 It was clear early on that the initiative was fulfilling a common need during a painful time, and they knew they were building something special. “We were grieving on a global scale after the murder of George Floyd, and we felt helpless. When Ollie came with this idea that would offer some sort of salvation, it was the right time, right idea, right people,” explains Nadeem.

But despite the senseless acts of racial injustice that year that shook the world in 2020, Flock Together wasn’t a direct reaction, but the result of lifelong experiences of racism in the outdoors. The underrepresentation of people of color was more than a priority for the duo – it was the starting point. “It’s about getting people of colour to reclaim space and enjoy the outdoors. That access to the outdoors hasn’t only been hidden from us – we’ve been systematically shut out,” says Nadeem.

Both founders open up about how bird watching is still both perceived and portrayed as a white space. Beyond the overwhelmingly whitewashed aesthetics in mainstream media and brands, there’s a genuine fear for the safety of people of colour in nature and a long history of restricting accessibility in outdoor spaces. 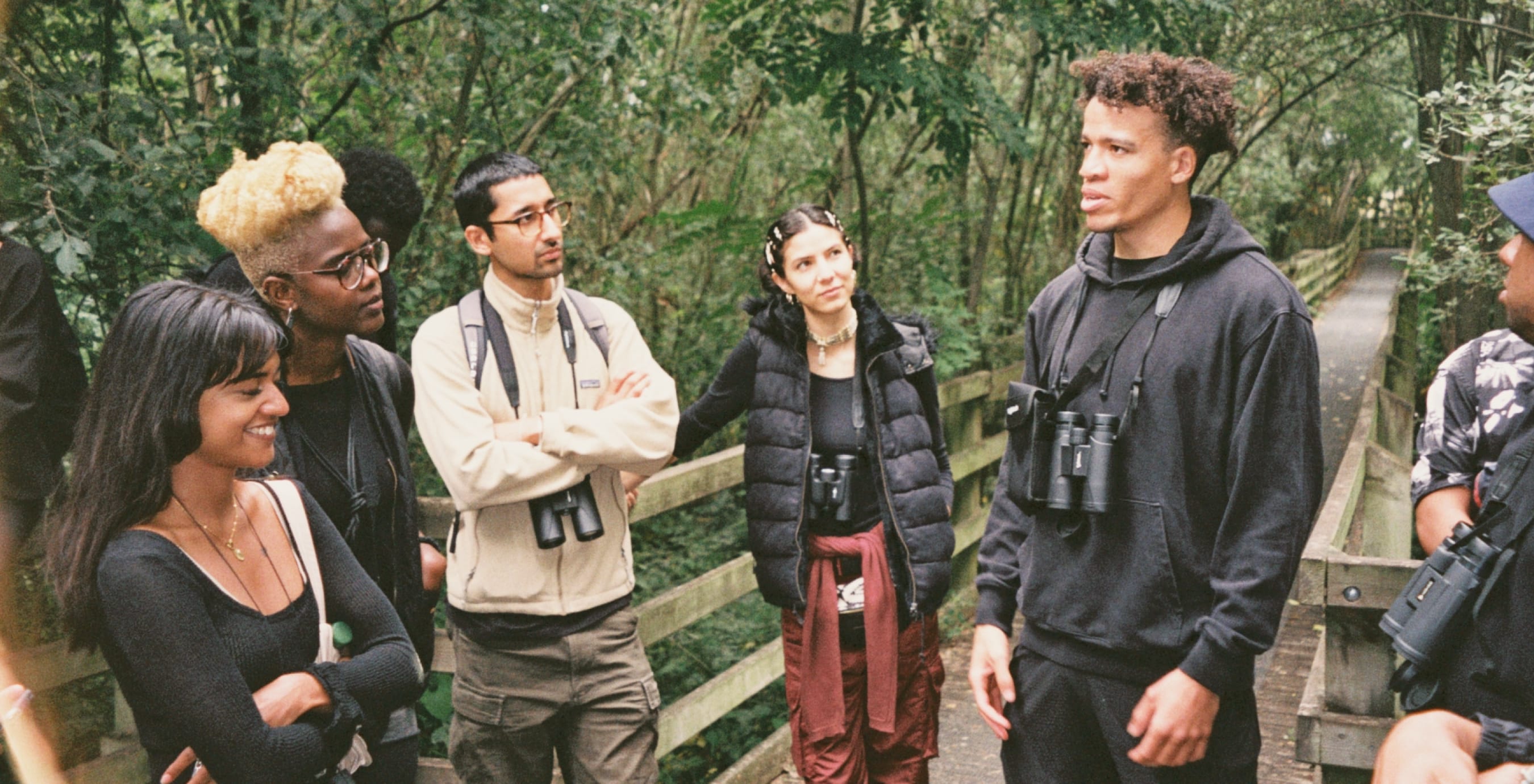 In 2020 alone, we witnessed such acts of violence with Christian Cooper, a Black bird watcher in Central Park who was threatened by a white woman after respectfully asking her to put her dog on the lead, as well as Ahmaud Arbery, who was fatally shot by an armed white man while jogging in South Georgia.

From the very beginning, Flock Together served as a space for healing as a community and a mental health support system. The collective is dedicating its efforts to normalise and protect the presence of people of colour in the outdoors. Through a growing network of brand partnerships, they’ve been able to amplify their message far and wide to global audiences and gather donations for clothing and equipment. Within a year, Flock Together has also set up chapters in six other cities, from Toronto to Tokyo, Accra and New York.

“If we can lower that barrier to entry and give access to this infinite bank of spiritual and mental benefits, our job is done,” says Nadeem. Such early intentions shaped the six pillars of the Flock Together philosophy, which includes challenging perceptions, championing ecological support and providing creative mentorship for the next generation. 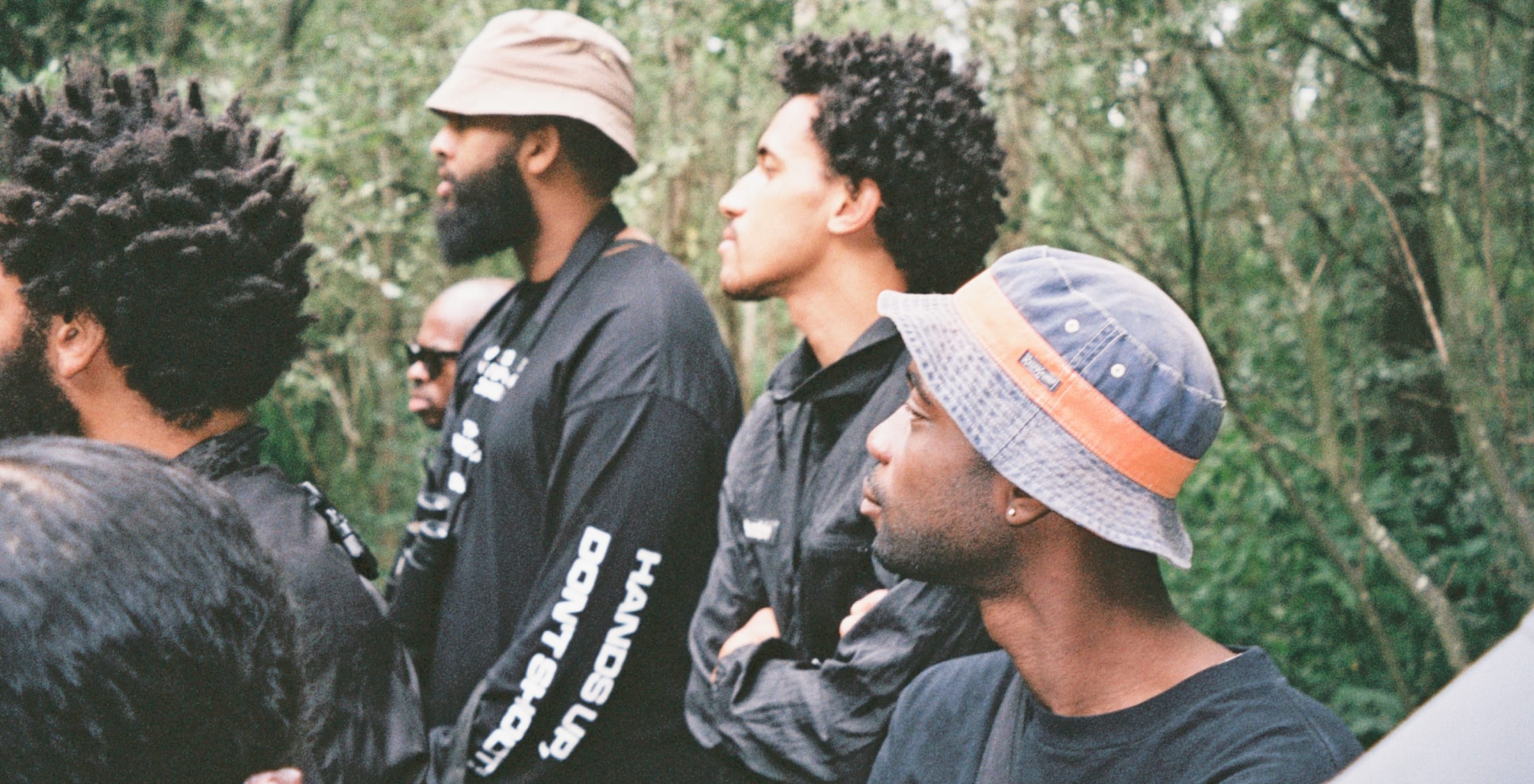 “There aren’t many places in life where you go and don’t have an expectation on you to deliver, be on time, or dress and speak a certain way,” explains Ollie. “The freedom that the outdoors offers is second to none, but it’s also an opportunity to gain perspective.”

Ollie, who founded the award-winning creative agency Futurimpose, leaned on birdwatching for years as a way to cope with his fast-paced and stressful job. The outdoors had always provided an escape, but sharing that space with people of colour offered a greater sense of collective community.

“I have a very stressful job and it's nonstop. A lot of the time you struggle to be able to switch off, focus on a task and give it your all. When I’m in nature, I get inspired without having to do anything. I can’t find that anywhere else in life, that pure safe space that allows me to gain perspective without distraction and be inspired to create,” explains Ollie.

Bird watching, by its very nature, teaches patience and can open your attention to the less visible things. It’s a practice easier said than done that involves a consistent effort to sustain such meaningful attention. But Ollie assures me that surrendering takes time. The difficulty is a result of our damaging modern myths of productivity, and attaching our identity to our careers, which breeds a resistance to doing nothing. 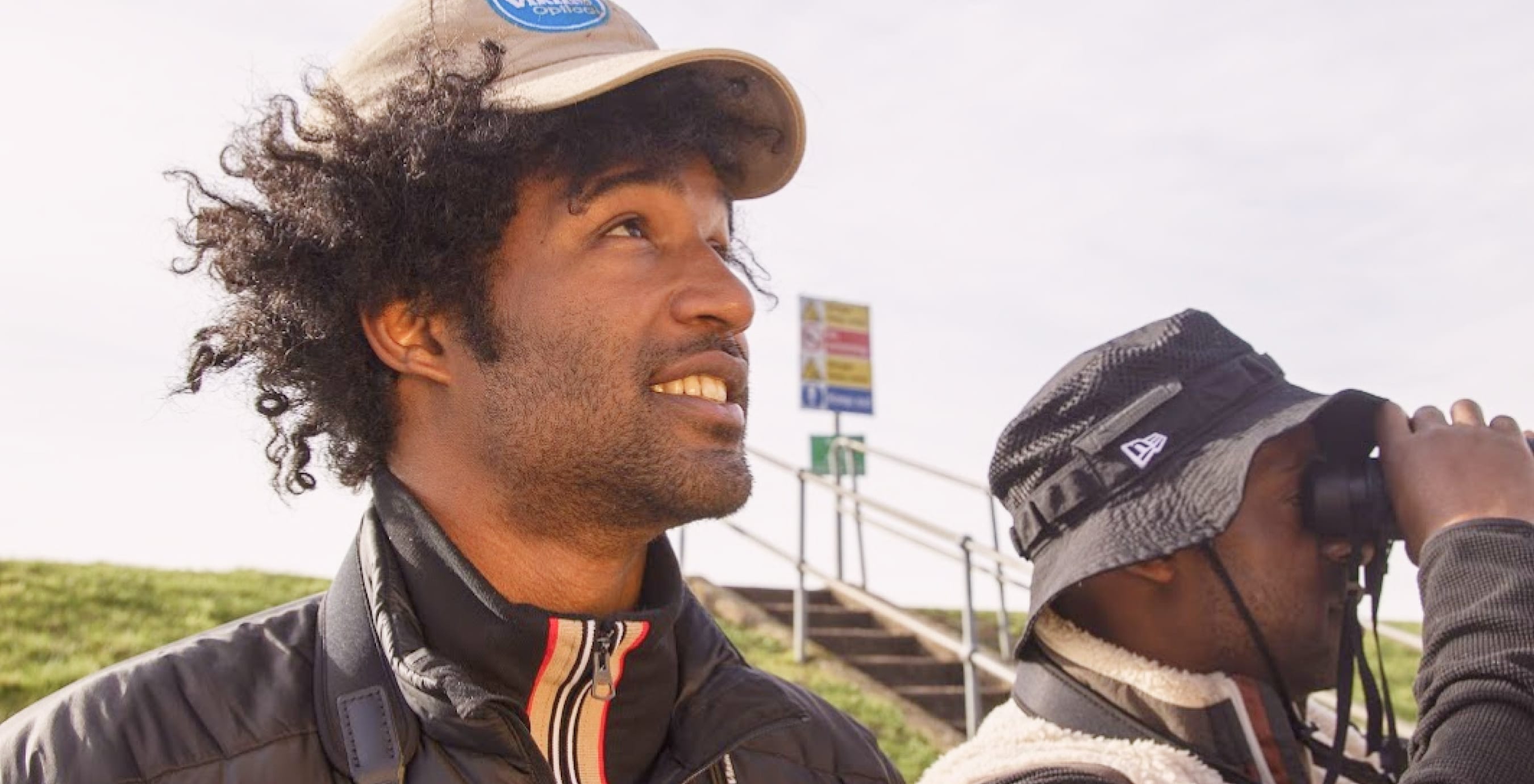 “What makes it hard is our own minds not being used to having to not perform, or not to engage in a certain way. You don’t have to do anything – you have to get yourself into a state of mind where you have no expectation and you’re patient. Nature will lead you.”

Unlike most things in our rapidly-evolving modern world, nature demands nothing of you. “You truly learn to appreciate the journey as opposed to the destination. A lot of the time, you don't even see any birds, and that’s fine,” shares Nadeem. More often than not, you can’t look for birds, but birdsong finds you.

“By the end of your bird watching time, you’ll still have walked through beautiful landscape and given yourself an organizational space, a meditative space, where you can really think about what it is that troubles you and how best to approach those things.”

Once a month, Flock Together meets for a pre-planned route through some of London’s green spaces. As they stop for breaks, members open up to share experiences, recent achievements or struggles. The founders aim to nurture an inclusive environment where members can show up as they are, and discuss anything. 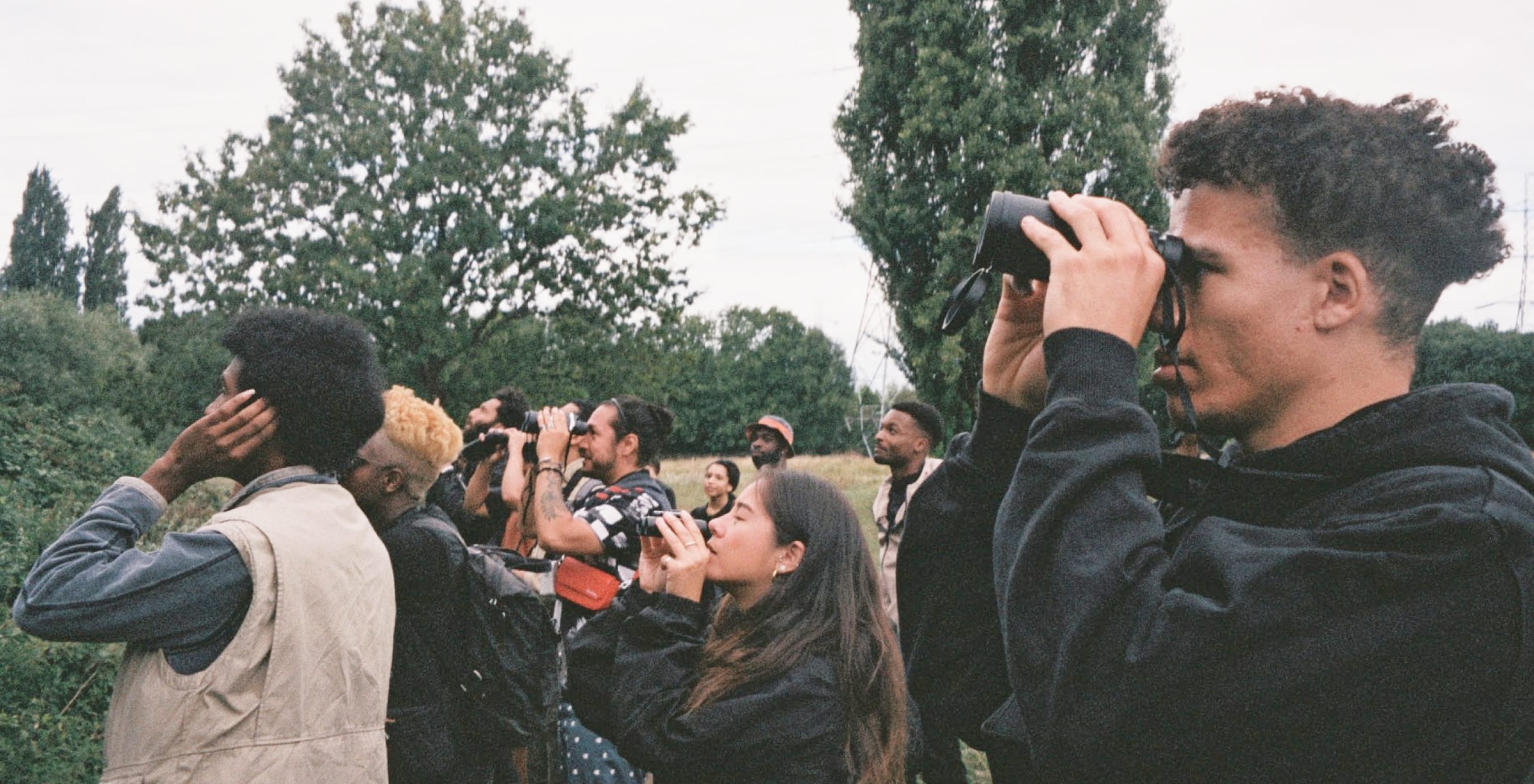 “That’s something that’s been fundamental to Flock, which is that we’re here to support one another. My role is to encourage people to speak in this safe space and environment, because it’s not easy to talk about what you’re dealing with,” says Ollie. “In the Black community we’re not big talkers. I’ve been hoping from the beginning to encourage people to see this as a space where we can be honest.”

Science continues to show that we have an innate drive to connect with nature. Biophilia, a term popularised by Harvard biologist Edward O. Wilson that literally translates to “love of life”, is the idea that our connection with nature is biologically-driven. We’re not only wired to be outside – but we’re certainly happier when we are. The widening disconnection to the natural world was a concern long before COVID-imposed restrictions, a result of the rise of the digital age and demanding indoor work where our senses are underused. Despite the growing concerns of how such conditions are impacting our mental wellbeing, it’s not too late to restore connection to nature, especially with younger generations. 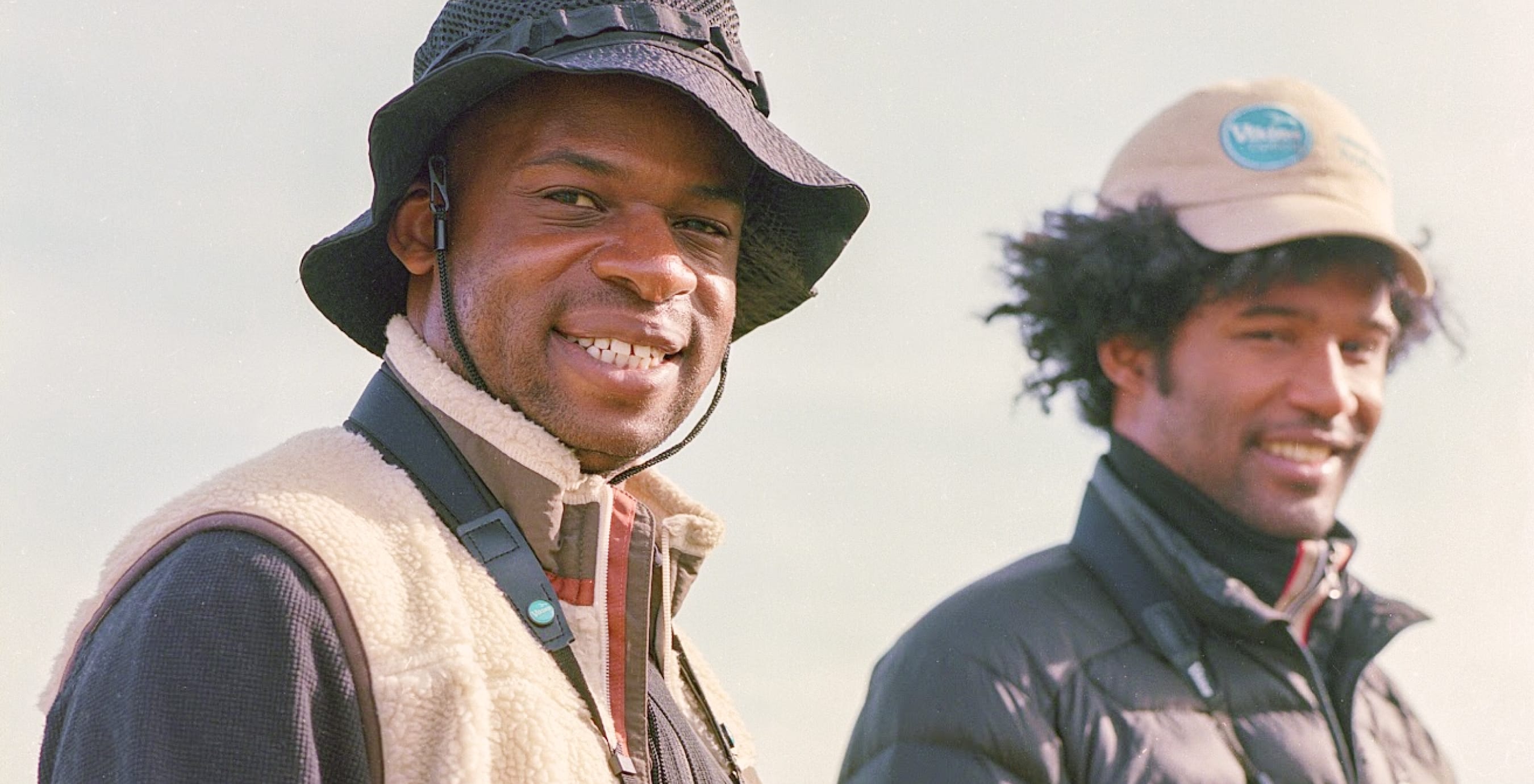 Nadeem, whose professional background is in youth sports coaching, considers himself fortunate to be in a position where physical activity and nature are a part of his daily life. Surrounding yourself with free, exploratory play and discovery are concepts we tend to overlook after childhood. At an early age, curiosity of the natural world helped him overcome mental roadblocks and trauma.

“When I was going through turbulent times, I felt as though my environment was to blame. I remember one day looking at a map of London and seeing a massive green space on the opposite side of the city. When I went there, I fell in love with it. That was a moment I realised I can control my life and what I surround myself with.”

He continues, “There's great beauty all around me – even in places I perceive to be stressful and depressing, because in those same places I would see jays, or wagtails. It was a case of standing in the same turbulent space, but choosing to look at different things. That was a great benefit from birding.”

The restorative power of the outdoors helped Nadeem change his perspective. His awakening to the expansiveness of nature since then is what inspires him to share such enlightenment with the next generation. “The world is quite fractured as it is, and the next generation is growing up in it. As they grow we want to encourage the benefits of the outdoors so that it becomes part of their routine and life,” says Nadeem. 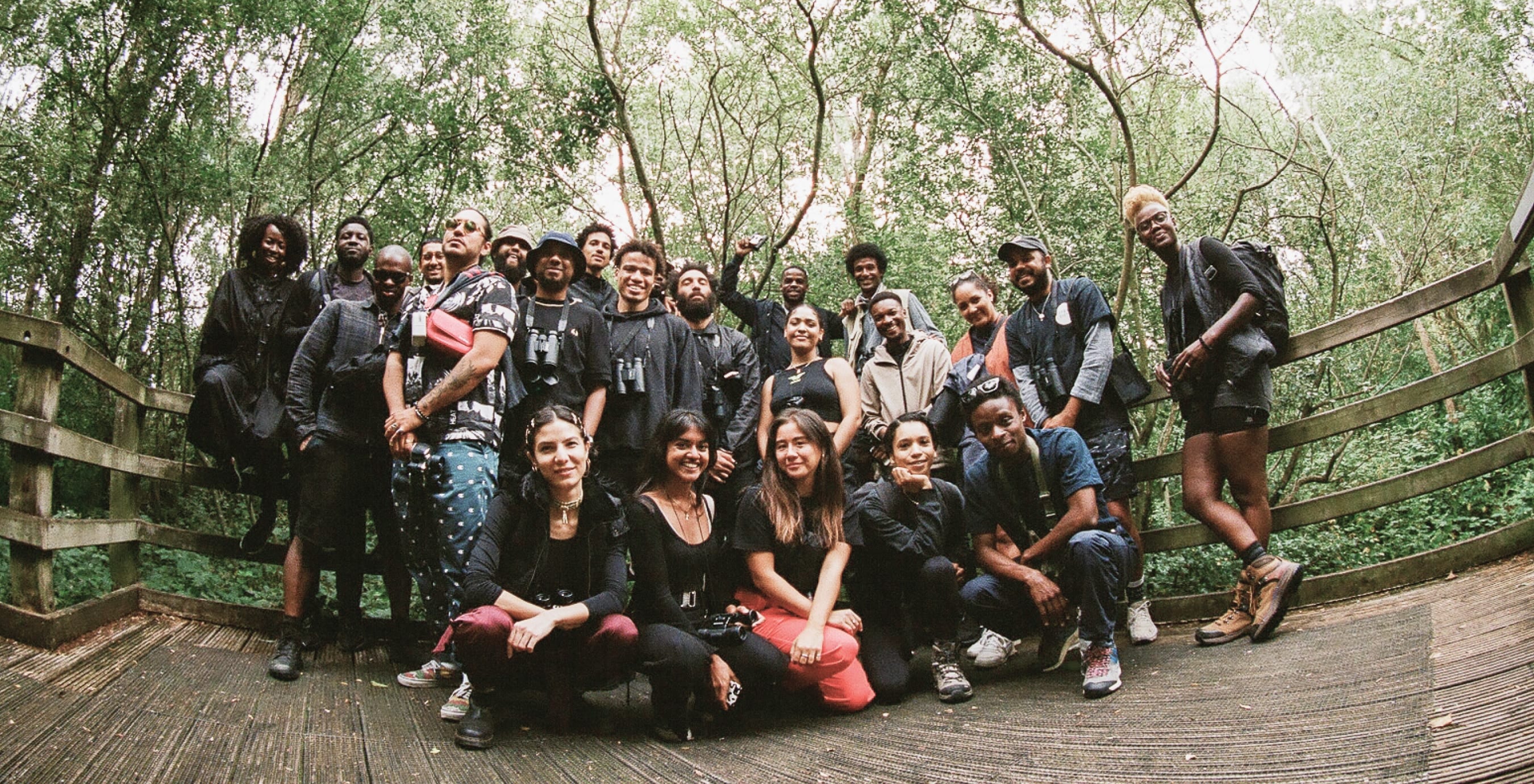 Nadeem and Ollie have recently started securing funding for Flock Together Academy, which will bring birding to school children of all ages and backgrounds. They want younger ornithologists to not only learn about the health benefits of bird watching at a young age, but to also bring innovation to wildlife conservation.

“A lot of young Black kids are told to be football players or rappers. We need to change that stigma in the Black community and make sure these young people know they can be anything that they want to be,” says Ollie. “Birding has taught me the importance of patience and how to manage a frantic brain in a frantic world. The benefits are endless across life, work, personal relationships. Everything blossoms from taking time to slow down.”

As we grapple with the climate crisis in our natural world, we face an equally alarming mental health threat worthy of our attention. But bird watching isn’t treated as a lifehack in Flock Together’s philosophy. Their mission to inspire engaging with nature through community stems from a truth we tend to overlook – that we already have what we need, and it’s ours to preserve.

Love what you do

We believe that with the right tools, anyone can turn their passion into an empire. So we made them.